Welcome to the first October edition of Friday Five!  This week, I thought I'd share what I love about Auburn Football because I have the privilege of attending tomorrow's game (woo hoo!).  Seeing the game on TV is one thing, but being there is completely different.  For those of you new to this blog, yes, I am a female who loves football.  Some (including my husband) might say I'm even a little crazy about it. 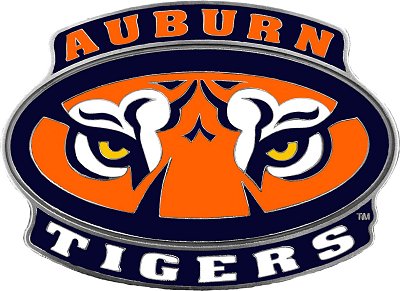 1.  Watching an eagle fly around the stadium!  One of the pregame traditions is to have a bald eagle fly from the top of the stands, around the stadium, down to the 50-yard line to his trainer.  It is truly a beautiful thing to watch this magnificient animal.  The crowd continues to shout "WARRRRRRRR" until the eagle lands and they end with, "EAGLE, HEY!".  Even if you aren't a football fan, you can enjoy and appreciate this beautiful scene.

2.  Aubie!  Aubie is the Auburn mascot who provides entertainment and skits during the whole game.  He also makes appearances at other venues, including running the 40-yard dash at the R&B show.  It is impossible to not smile when you see Aubie.  When the game gets boring or becomes a blow-out, I love to watch Aubie and his craziness.

3.  The Band!  This is one of the reasons why I love college football more than professional.  It just doesn't feel like a football game to me without a band.  What can I say, I did marry a band geek, too.

4.  The game.  I can't list what I love about Auburn football if I didn't mention that I love the game itself.  I've loved football since I was a kid, must be a genetic thing by growing up in the south.  I love it so much that I play intramural football and kick major hiney!  If Trey and I end up having a boy (later on), and he wants to play soccer, I may just die!

5.  The spirit.  I've been to almost every corner of this country (haven't made it to the northwest . . . yet), and it's such a cool thing to see someone else with AU clothing or jewelry and shouting "War Eagle" and getting a "War Eagle" back.  It's like saying "hello", only it goes much deeper.  Something I've always respected about Auburn University is the spirit of comradery it instills in its students.  I didn't go there as a student, but my brother did and I still see the spirit alive in him.  When it comes to college football, Auburn is home.

Now that I've fully endulged in a football only post, I know I must yield.  I'm sure there're some UA fans reading this who might delete me from the RSS feed now.  I promise I will get back to diabetes stuff next week . . . until the Iron Bowl!


Have a great weekend and WARRRRRRRRRRRR EAGLE, HEY!!!
Posted by Holly at 11:50 AM