So for No-D Blog Day, I wanted to talk about something that's really near and dear to my heart. To be honest, I'm a crappy diabetes advocate. I've been to one JDRF walk in the almost 5 years I've been diagnosed. I haven't contacted to my local congressman to talk to him about funding towards a cure or the artificial pancreas project. For the most part, the only time my husband and I discuss my diabetes is when it is extremely evident via a scary low or high.

But there is something that I'm a real advocate for and that's adopting rescue animals. When Trey and I discussed getting a puppy to add to our 2 person, 2 cat family, we tossed around the choices of breeds we wanted. He wanted a boxer, I wanted an English bulldog. However, after researching breeders in the area and realizing the amount of rescue shelters there were in town, we decided to get a rescue.

We were lucky to pick out an 8-week-old, 10 lb. ball of fur at PetsMart, because most rescue dogs are older and have some type of behavior problems. Roscoe's momma came to the shelter pregnant with him and his 7 siblings. And we got to pick him out when they brought them to the store that day. Half Labrador retriever, half Siberian husky, my Roscoe is all love! Loyalty is his middle name, because he's never more than 3 feet from me. I love that big ball of mess.

Missy we adopted as a roughly 1-year-old boxer/lab mix, or a boxador as I call her. She came to us with some neglect issues, because we noticed that she wants nothing more than for someone to pet her and play with her ears. We gave her all the love we could and balanced it with enough discipline to make her a great dog. She has the shortest attention span of any dog I've ever met, especially when she sees a squirrel. She's our little sweetheart. 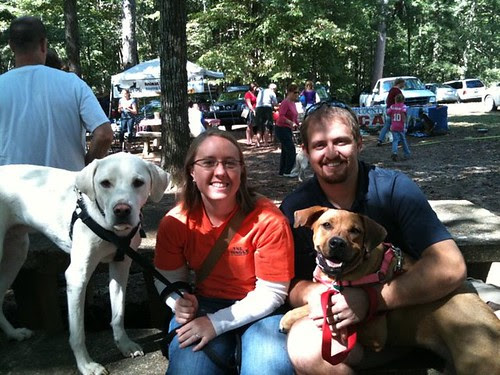 Our family at the local Dog Fair

So if you're looking to add a furry animal to your mix, I extremely advocate looking at rescue animals. There are millions of dogs and cats in our country that are waiting for someone to give them a chance. And after a few years, the old saying is really true, "Who rescued who?"
Posted by Holly at 7:30 AM