There has been a lot going on this week pregnancy-wise, even though I didn't have an appointment this week (shocking!). I'm starting to feel like I should get paid for going to the doctor, because I'm there enough for at least some part-time pay. Maybe if I learn to do some filing I can save on some of the copays?

First of all, I've really started to pop this week. All of my pre-pregnancy pants cease to button anymore, and I bought my first pair of maternity jeans last weekend (which I L-O-V-E!!!). I'm starting to walk around with my pants unbuttoned with a shirt over the zipper, hoping that no one will point out that my fly is constantly down. I'm kind of glad that I'm finally start to feel pregnant on the outside, instead of from the inside out. Speaking of morning sickness, my pukies have definitely subsided in the past week. But I still have the occasional morning upchuck, which I've come to accept as part of my routine. 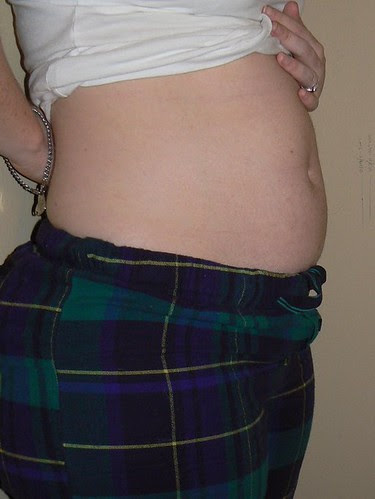 Also, insulin resistance has started to rear its ugly head. It started out sporadically, so I wasn't sure if it was the real thing or not. But after 2 days with lunch post-prandials in the 200s for a couple hours, I knew something wasn't right. And after a post dinner high of 180 mg/dL that stayed with me for 5 hours, I decided to make some changes. I've upped my insulin:carb ratio from 1:10 to 1:8 and increased my daytime basals by 0.1 units. I don't go back to my endocrinologist until after the New Year, but I can't wait on his guidance to wrangle in these numbers. My changes seem to be working so far, but the lows still plague me. But I'd rather they plague me than any stubborn high.

And finally, I'm getting kicked! I felt what I thought was the first kick last week while Trey and I were out to dinner. However, it didn't really feel like a kick, but more like Ferbie was doing flips inside me. Like when you dive into a pool and do a flip in the middle of the water. They like to do it a lot in the mornings, right after I get to work. For a good 30 minutes or so, I can feel them their doing gymnastics's routine. They also like to do it when Trey gets home from work. It's like they hear his voice and go crazy in there! I know it will be awhile before I feel them on the outside, but I'm loving these little flips.

I don't have any more appointments until after Christmas, so hopefully Ferbie and I can endure the holiday festivities without totally succumbing to the insulin resistance nightmare. In the meantime, I'll be here--getting kicked.
Posted by Holly at 8:13 PM