I love going to the movies!  Especially during the summer.  I love the smell of buttered popcorn in a dark room, sitting next to my hubby while sharing a large Diet Pepsi.  Our first movie we saw together was Hidalgo (2004).  It was an 11:00 PM showing, and he learned then that if he wanted me to make it through a movie awake, we better stick to matinee showings.  However, I still have that stub, though slightly faded now.

And there are several movies that I'm looking forward to this year:
But I'd like to take this opportunity (or blog post, however you see it) to mention some famous movies featuring diabetes and how (in)accurate they are:

Let's start with the biggie and obvious:  Steel Magnolias 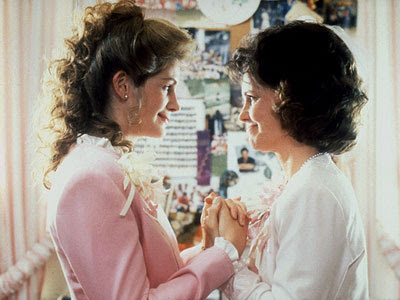 Julia Roberts' character Shelby is a diabetic bride who loses her life due to complications from a kidney transplant from her mom, M'Lynn played by Sally Field.  The scene that really gets me is the beauty parlor scene on the day of the wedding when Shelby suddenly experiences low blood sugar or hypoglycemia.  Shelby's face says it all.  She goes from a blushing bride to pale white and immediately begins to lose it.  M'Lynn notices and reaches for juice and begins to feed it down Shelby's throat, even though she tries to fight her.  I love how patient M'Lynn is even when Shelby is saying horrible things to her.  She knows it's her low blood sugar talking, not her daughter.

Personal opinion:  the low blood sugar scene was pretty dramatic but, hey, it's a movie.  I've certainly felt paralyzing lows like that before, most all of them insulin induced.  I cried my eyeballs out when Shelby dies (hello? who doesn't?!).  The only thing I don't like about this movie is a LOT of people get the wrong impression about type 1s being pregnant.  With so many advancements like meters, pumps and CGMs, "diabetics have babies all the time".  If someone tries to quote SM to me when I'm pregnant, I will say "Pregnancy doesn't kill diabetics, diabetes kills diabetics.  And mine is just dandy, thanks!" 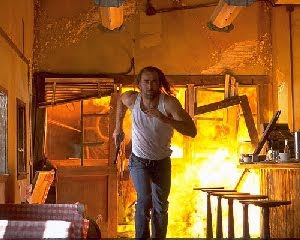 Oh Nicholas Cage, you can retrieve my diabetic supplies anytime. *swoon*
Nicholas Cage plays Cameron Poe, a prisoner being released to go home to his wife and daughter.  His bus and plane are hijacked by some deathrow inmates planning for a life a freedom.  His friend Mike "Baby-O" O'dell is a diabetic prisoner (hey, aren't we all? *sigh*) who expects to receive his insulin shot at the inmate transfer, but the hijacking inmates take over before he can get his syringe.  When the inmates make a stop at Carson City to change planes, Poe searches the area for a first aid kit in hopes of finding a syringe for O'Dell.  Once he finds one and O'Dell administers his insulin, all is peachy, until O'Dell gets shot.  Then, Poe spends the rest of the movie trying to keep him alive until the plane crashes in Las Vegas.

Personal opinion:  O'Dell's reaction to not having insulin is 100% WRONG!  He begins to sweat and shake, much like hypoglycemia.  If he were experiencing high blood sugar, he would have been peeing all over the place and vomiting.  Then, when he does get his syringe he administers the insulin in his arm.  WTH?!  The arm?  Ouch!  Any shot given in a muscle hurts like Hades!  If I put my pump site too close to ab muscles it feels like I have a huge splinter in my stomach.  Butt or thigh for me.  And O'Dell's immediate recovery is also inaccurate.  Experiencing extreme high (or low) blood sugar takes at least a day to fully recover.  So, this movie is a great action film, but totally inaccurate when it comes to diabetes, except that insulin goes in a syringe.  Nice try, Hollywood.

Haven't seen yet, but sounds interesting:  The Panic Room 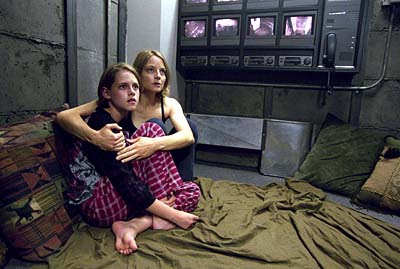 I'll be honest and say that I haven't seen this movie yet, but I plan to for our next visit to the video store.  So, for a full synopsis, go here.  But the general story is this girl and her mom are locked in a safe room while burglars invade their house where the daughter, Kristen Stewart, has a hypoglycemia attack and passes out.  The movie ends with someone barely getting to her in time to administer a glucagon injection.  You can tell me if the movie is worth seeing or not.

Personal opinion:  The only thing I do know about this movie is that Kristen Stewart has become a celebrity advocate for type 1 diabetes, often seen at JDRF runs.  And with her recent Twilight fame and all the latest researches for a cure, I'm glad.  Advocacy is best to come from a familiar face.

So there are the big 3 movies with diabetes in their plot line.  Also, for anyone who's seen Iron Man 2, did you see his blood toxicity meter?  I leaned over to hubby and said, "Wish they made glucose meters like that."  Seriously, it was a pump-size meter with no coding, lancing, or stripping.  Just insert your finger and 5 seconds later get a blood glucose . . . er . . . toxicity reading.  How awesome! 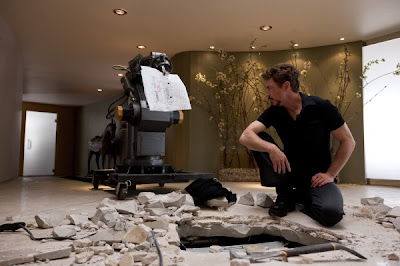