Yesterday I had my 28 week checkup with my OB. I was rather excited about this appointment because it had been over a month since my last appointment (you'd think I was missing the place) and this appointment included an ultrasound. I hadn't seen our little girl for 10 weeks when we found out that she was going to be a she. So regardless of my weight, blood pressure, or anything going on in my urine, I knew I was going to get some face time with my daughter. And that would trump anything else going on that day.

I was called back and Trey followed me into the ultrasound room. I've been very fortunate with my OB's office, even though he is a high-risk doc, that his office is small enough that I see the same people every time. So it's nice to see the same girl that showed me my baby's heartbeat a lifetime ago. I climbed on the table and she put the blue gel on my stomach. She turned on the screen and it amazed me to see how big my baby has grown! She doesn't fit on the screen anymore, but we got some great shots of her face. And her face! I can already tell that she has the chubbiest little cheeks. And she had her hand up by her head, like she was a fainting damsel or something.  Best of all, her stomach and head are perfectly in proportion with one another, so there's no worry about growing a big baby from my diabetes. She's also measuring ahead by 10 days, but those measurements can be off the further along I get. It looks like she weighs right at 3 lbs even right now. (So where in the world is my extra 25 lbs coming from?!) 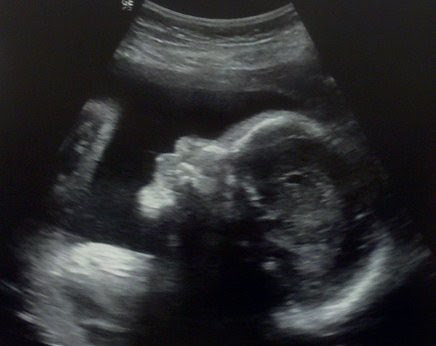 After my ultrasound, I began my "regular" appointment, which included the usual routine: pee here, step on here (weight), stick your arm out here (blood pressure). As I mentioned, I'm up a total of 25 lbs so far this pregnancy. And I definitely feel it after walking for awhile and I get a cramp on my side. I've never had a lot of weight in my middle (bottom, sure, but not middle), so I feel very unbalanced these days. Next, the nurse took my blood pressure that came back high at 140/90. Calmly, she told me that I needed to go lie down on my left side and she would come take my reading again. I didn't freak out about this, surprisingly, I just got caught up in her instructions and did what I was told. I know I've had normal blood pressure readings at other times, and there was little I could do about it at that point. So Trey and I waited in a room, me laying on the paper-draped table and him reading from his phone and cooing over our baby's pictures. I closed my eyes and nearly fell asleep, listening the sounds of feet shuffling past us. Fifteen minutes later, the nurse came back and took my pressure again: 122/74. Everyone was pleased with that number, so I was free to sit up at that point.

Finally, my doctor came in and greeted us, "Baby looks great!" I'm glad that was the first thing he mentioned, because it reminded me that's the priority around here.  He asked me how my numbers were doing, and I said I have my good days and bad days but the good seem to outnumber the bad. I asked about our baby measuring a week and a half ahead and if he would change my due date. He said he would not change my due date and would allow my baby to stay in there until a full 40 weeks. I was relieved. I know it's best for her to camp out as long as she wants to, and I don't want to force an eviction earlier than necessary. I mentioned the rogue contractions I seem to be having, and he said he's only concerned if I'm having more than 6 contractions an hour (right now it's about one a day). And lastly, he said he's not worried about my blood pressure because I wasn't spilling any sugar or protein. I just wonder how many high readings they'll allow me or if they're OK with it as long as everything else is OK.

I set my next appointment for 2 weeks from now, so I begin the expedited appointments until her arrival. I'm so glad to know that my daughter seems to be thriving in there, it gives me a peace that I'm doing a better job than I give myself credit for. Doctors are doctors, and I'm not sure I'll ever be settled with being there. I just wish they had more comfortable beds or something to watch.
Posted by Holly at 9:00 AM

Email ThisBlogThis!Share to TwitterShare to FacebookShare to Pinterest
Labels: Pregnancy