I can't believe it's been two years since I married him.  It seems not long ago that he was talking me out of my calzone at the university cafeteria.  And it seems like just yesterday when he saved my life.  He knows what it means to say "in sickness and in health" and really mean it.  On this day two years ago, I became his wife.

I woke up around 8:30 AM (hey! it's about that time right now!), peered through my sleepy eyes and my first thought was, "Today's my wedding day."  Because I was hosting my parents, brother and sister-in-law, and 2 nephews, I was banished to sleep on the couch in the living room of my apartment the night before my wedding.  My mom woke up shortly after I did and came into my little kitchen and started making coffee.  "Good morning, bride!"  "Mornin'."  Just because it was my wedding day doesn't mean I was automatically a morning  person.  "Your dad's getting ready to go.  Do you need to go get changed?"  "Mmmm hmmm."  My dad and I were planning to go retrieve bagels from Panera as part of the bridesmaids breakfast my mom was making.

I got dressed in my button-up shirt and jean capris and headed out the door with Dad.  We were one of the first customers at Panera because we wanted the bagels to be fresh.  Then we headed to the hotel where one of my bridesmaids was staying.  As we were pulling out of the parking lot, a slight drizzle began to fall.  "Look!  It's raining!  It's raining on my wedding day!  Yay!"  Got back to my apartment where my other 3 bridesmaids had arrived.  I offered to help Mom with the bacon but she told me, "Get back, I don't want you to get bacon smell in your hair."  "Mom, if I smelled like bacon I'm pretty sure Trey would run down the aisle to get me."  Finally awake after a French toast bagel, bacon, and scrambled eggs, my girls and I head to the hair salon.

I wanted my hair to look natural and wavy, so we went with a half-up do with loads of curls that would settle down to waves by the time the 2:00 PM ceremony started.  After we were all haired up, we got back in the car and headed to the wedding chapel where I was to get dressed in the carriage house.  After putting on my armor undergarments and my two garders, one for the reception and the other to hold Arnold, my girls helped me get dressed.  Then my mom put my veil in my hair, holding back tears.

About this time our photographer, videographer, and wedding coordinator showed up for pre-ceremony pictures.  I smiled until my cheeks hurt, including an impromptu Charlie's Angels pose (that definitely made it to the album).  After about 45 minutes of click-snap-click, I started feeling foggy.  "Guys, I'm gonna need a break for a little bit."  My mom reached for the packs of juice we brought.  Since I was diagnosed as an adult, this was the only day she got to take care of her diabetic daughter until Trey took over.  As I sipped my juice, she made me a ham sandwich.  All of my girls took a juice box, too, and it was quite a sight to see several adult women sipping on juice boxes in formal gowns.

Before I knew it, the time was 1:45 PM and it was time for my girls to line up.  One-by-one they left the carriage house until it was just me and my dad.  We had several moments alone together, and he told me he loved me and how beautiful I was.  Other than marrying Trey, this was the best moment of the day.  The wedding coordinator came for me and said, "Ready?"  "Let's do it."  I made the walk across the bridge to the chapel into the foyer.  The music stopped.  I took a deep breath and the music started again.  The doors opened and I took a step forward, clutching my dad's arm.

I don't remember much except that I was smiling, and he was smiling, and there were a ton of people here!  Too late for stage fright.  The ceremony was kind of blur because I was just concentrating so much on following the pastor.  The two things I remember 1) nearly crying after Trey got done with his vows, but sucked it up because I was next and 2) our pastor's words when he said, "Now all of your joys will be doubled because there's two of you to share them, and all your sorrows will be halved because there's two of you to bear them."  A prayer, some rope tying, and a kiss, and we were husband and wife. 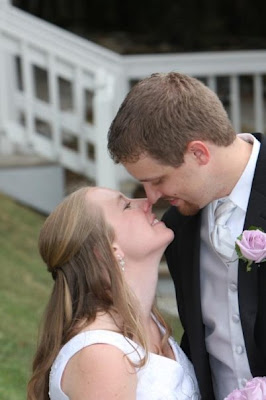 More pictures, click-snap-click, then the reception.  It was so great because we were able to talk to everyone there for a good length of time.  Then it was time for cake cutting (where Trey's piece landed on his nose, of course), sparkly juice, and the garder.  I had told Trey the day before which leg to pull from so he wouldn't grab the wrong garder.  The last thing I wanted at our wedding was a bloody site pull.  Then the bouquet toss that went to the youngest female in attendance, awesome!  More pictures and visiting, and before I knew it we were walking through a tunnel of bubbles into Trey's car to leave.

It was a great day, but it wasn't the best day of my life.  That has happened every day since then.  More than being his bride, I love to be called "his wife." 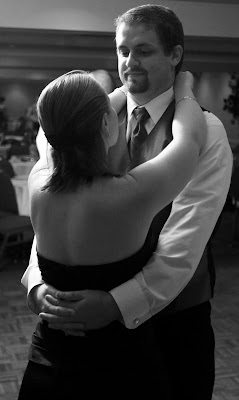 At another friend's wedding last year. The best photos are made when you're not looking.
Posted by Holly at 9:18 AM