Since Blogger was down most of yesterday, I didn't get a chance to publish the post I had prepared.  But it was a post about how insecure I've been feeling lately in my body.  Honestly, it was kind of a downer post, so this morning I decided to delete it.  You can thank Blogger for that.  However, I was so inspired by George's post yesterday that I decided to do my own little version.  I'm usually not one to copy other people's material, but in this case, I hope George's post has a rippling effect.  So, today I'm going to post how God brought Trey and me together.

I was fortunate enough to be born into a God-loving family.  I don't remember a time in my life my family didn't go to church consistently.  You can pretty much say I was birthed in the pew.  But, of course, that doesn't automatically make me a Christian.  Each person has to have their own journey, and I was just lucky enough to be exposed at a very young age.

When I was 8-years-old, our church was performing a drama sermon called "Heaven's Gates and Hell's Flames".  It was a very scary, real version of what happens when we reach death.  I played a demon, my brother played a drug dealer, and my dad played the Devil.  The night before our first performance, the director called all the cast together for a special session.  He wanted to make sure that everyone in the play understood what was going on and how important and eternal our roles were.  After seeing the reenactments of my fellow castmates and hearing "eternal damnation" from my own father, I certainly understood.  The director held an invitation and I wanted to walk down the aise, but I was scared (funny, I wasn't scared of being a demon in front of thousands of people, but I couldn't handle walking down the aisle in front of maybe a hundred).  So, I asked my dad to walk with me.  What was so cool about this (to me) is that my dad first walked me down the aisle to my Heavenly Groom before he walked down the aisle to my earthly groom 15 years later.

It was until I was 11-years-old that I truly started to have a relationship with Christ.  Sure, he was my Savior, but he wasn't my Lord.  It was during this time that my maternal grandmother passed away.  Life had become a little more real.  My grandmother bought me my first Bible, a pink Precious Moments Bible.  I began trying to read it on my own during this time, and started having my own prayer life by myself.  In junior high and high school, I went to youth group and actually learned how to do a devotional and really dig.

It was at this time that I remember praying for a husband.  I wasn't sure if I was supposed to ask for one or if it was one of those "given" things.  But before I could even get the words out of my mouth, I knew the answer.  A smile reached across my face and I began to cry.  I was promised a husband, one day.

However, in high school I started dating a guy who would be my boyfriend for the next 3 years.  I thought he was it.  We said and did everything high school sweethearts could say and do to one another.  Including make each other crazy angry.  We were passionate about everything, including our fights.  We left each other very damaged and heart broken.  After we finally broke up, I was numb.  It was a pain that was dull and sharp at the same time.  I remember physically being in class at college, but I might as well have been back at my room screaming (like I did every night).  Did anyone see New Moon?  The scene where Bella is screaming and crying in her sleep made me cringe a little.  I know all too well what that was like.

But there was another reason I was so heart-broken--I had ignored God's direction in this relationship.  I was heart-broken over losing someone, but I was more heart-broken that I walked away from God.  I prayed for forgiveness, no, I begged for it.  All I wanted was to feel His love again.  I could have been single for the rest of my life with 14 cats, and that would have been OK with me, as long as I had Him.  But that's when God reminded me of His promise to me, that I would have a husband one day.  That's when I got angry, with Him.  "If you want me to married one day, then You do it!  No more break-ups.  I don't care if he comes along 50 years from now, I'm NOT going through this again.  Never!"  So, that was it.  I had settled with living the single life until God was going to brand some poor guy as Holly's husband one day.  I was out of it.

I honestly expected for God to give me some time, at least a couple years, to heal.  But His timing is perfect, along with His sense of humor.  One month, count it, ONE month after HS boyfriend and I break up, a 6'3", blonde geek with glasses comes into my life.

I had met Trey the previous semester.  He was an electrical engineering major, so my physics courses aligned with his.  I remember he was incredibly funny and comfortable to be around.  My very introverted self immediately was able to open up around him.  We were a lot like Jim & Pam from The Office.  I really didn't pursue the idea of him being "The Guy" until we made a car trip up to Nashville for a day.  We talked about how much we both liked dogs, wanted a house with a lot of land, and how we would raise our kids (yep, they were already "our" kids).  I was peaceful around him.

On our wedding day, our pastor read a passage from Ecclesiastes, Chapter 4--one of my favorite passages in all the Bible.  It's a book by King Solomon, arguably the richest man during the time.  And the whole book is about how everything in life is meaningless except relationships.  Then, as an alternative to the unity candle, we braided a cord of three strands representing the three parties in our marriage:  husband, wife, and God.

9 Two are better than one,
because they have a good return for their work:
10 If one falls down,
his friend can help him up.
But pity the man who falls
and has no one to help him up!
11 Also, if two lie down together, they will keep warm.
But how can one keep warm alone?
12 Though one may be overpowered,
two can defend themselves.
A cord of three strands is not quickly broken. 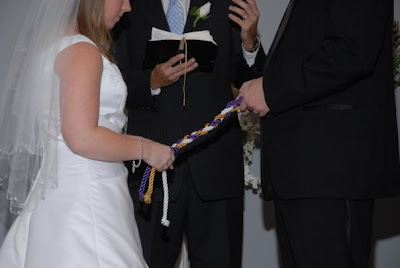 And I'm certainly not letting go.
The cord currently hangs from our mantle above our fireplace.  It's already served as a witnessing tool when someone asks, "Hey, what's with the rope?"
I certainly come with a lot of baggage, but God still loved me.  He not only gave me eternal life, but eternal joy.
Posted by Holly at 1:12 PM

Email ThisBlogThis!Share to TwitterShare to FacebookShare to Pinterest
Labels: Relationships