I had the best weekend down in south Alabama with my family.  We arrived down there around 9:00 PM on Thursday evening.  Sat around with my parents, talking and eating boiled peanuts (truly a delicacy) while watching the Braves game.  Finally getting to bed around midnight.

Friday we got up and went out on my parents' retirement purchase:  a 20 foot pontoon boat. 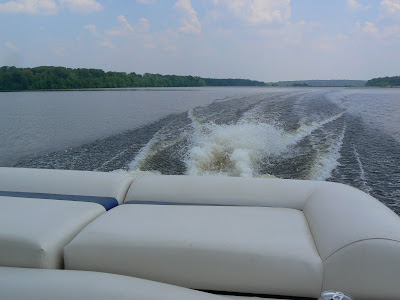 Nice view, eh?
Trey and I got out and swam a little bit, but the sudden temperature changes in the water was really weird.  I know it was just the changes in water depth, but I felt like a gator was coming whenever I felt the cool parts.
Saturday, Trey and my dad went golfing while Mom and I went to see my Papa in the nursing home.  My grandfather is 94-years-young.  He served in the Navy during WWII; he helped clean up after Pearl Harbor.  It's kind of hit or miss whether he remembers someone or not, but as soon as my mom said, "It's Holly," he lit up.  "You just moved didn't ya?"  "That's right, to a bigger house."  When Mom asked why he wasn't wearing his Navy hat, he smiled big and said it was in his room.  Heartwarming to see his smile, especially after mentioning the Navy.  He was having such a good day, I didn't want to leave. 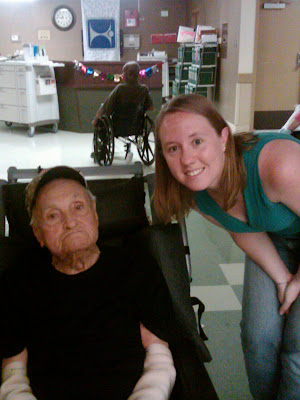 Spending time with my favorite veteran.
That evening we had a cookout with most of my family.  Several people there hadn't met Trey, yet, so that was cool to see.  We went swimming, ate burgers and hot dogs, and talked until the sun went down.  It was a great day!
Sunday was pleasantly uneventful.  We went to church with my parents, had lunch with some old friends, and bummed around the rest of the day.  I had the best afternoon nap on the couch while hubby held my feet.  It was great!
Suffice it to say that I had a great weekend, life wise.  Diabetes wise, it totally sucked.  As low as 50 mg/dL while driving in Montgomery (This test involved some teamwork between hubby and me, including one failed attempt with an "Error:  Meter not ready."  I forgot to tell him to wait for the "Apply Blood" screen.) to 284 mg/dL after failing to accurately bolus for a cappuccino, to everything in between with maybe 2 or 3 "normal" readings.  I don't know what it is about traveling, but it's like my little diabetes monster begins screaming, "Hey, this is not our routine!  So I'm gonna go haywire on you, mmmkay?"  And I'm still feeling it today, with a morning fasting of 211 mg/dL (awesome! /sarcasm).
It usually takes a day or two for my numbers to dwindle back down with my food and exercise schedule.  So hopefully by tomorrow I will be back to normal, whatever that is.
Posted by Holly at 8:30 AM