Per some requests via Twitter yesterday, I've decided to post the story of my first kiss with Trey and the adventure that was our honeymoon.  My blog has been very Constance heavy lately, so it might a good time for a little break.

I've already told the story about how God brought Trey and me together, but our first kiss wasn't as passive on my part.  We were freshmen in college and shared a physics class together during the spring semester.  My high school boyfriend and I had just broken up the month before, so I was perfectly content with throwing myself into my schoolwork.  But there was something about Trey.

He and I had actually met the semester before.  We shared a table at the cafeteria among several of our friends who resided in the same dorm.  The first thing he ever said to me was, "You gonna finish that," referring to my half-eaten calzone.  I was slightly annoyed with this odd request, but I gave in because . . . well . . . I wasn't going to finish that calzone.

Over the new few weeks until Christmas break, I would always find myself sitting next to him in the cafeteria.  He made me laugh.  He was comfortable to be around.  I'm normally very shy around new people, but being around Trey made it seem like he was an old friend.  And after my intense break-up, I was so glad to find comfort in his company.

Fast-forward to our physics class.  We sat beside each other in this huge lecture hall where the chairs were connected to these really long, rainbow-like tables.  Each chair was connected to it's own leg, alternating which side of the chair it was connected to, right or left.  So, in some instances, if two people were sitting next to each other and got up at the same time, they would nearly hug each other while getting up.  This made for some interesting encounters between us (though, I think he did this on purpose).  I knew I was liking him, but I actually forced myself from that thought.  It was too soon for me, and he was kind of dating someone else--in Utah.

Fast-forward again (feel dizzy yet) to the night before our first test.  I'll always remember it because it was the day before Valentine's Day, February 13, 2004.  The same cafeteria group had formed a subset study group for going over our notes.  We met in someone else's dorm, went over and over and OVER the study test.  "I'm hungry," I said without looking up from my notes.  "I could make you some ramen," I heard Trey say.  Surprisingly, I had been a college student for almost 7 months by this point and had yet to discover ramen.  So, we left our study group and went down to his dorm where he made me our first meal together--ramen.  After I finished, I decided it was time for me to go to bed.  As Trey opened the door for me he said, "Let me know when I can take you out sometime."  I grinned, "OK," and walked back to my dorm.

"That was weird," I thought.  "He said he was dating someone else."  Granted, it was online, and granted, it was long-distance (also granted, it was fairly new).  I walked into my dorm where my roommate said, "You OK, Holly?"  "I think I just got asked out."  "By Trey . . . ?"  Apparently, our friendship was somewhat obvious to people.

I was wide awake laying on my bed.  I couldn't get the thought out of my head.  "I think he likes me, but the ball's in my court now."  I can never "sleep on" anything.  I had to know where this was going, right then.  I called Trey and asked what he was doing.  He was still up studying in the cafeteria, this time for calculus.  But he was actually helping a friend study.  "Can I join you?"  "Sure, you might can help, too."  I knew my power of mathematics would come in handy one day.  We helped our friend Josh for about an hour before finally calling it quits on studying.  "What do you want to do now?" Trey asked.  We both obviously didn't want the night to end.  "We could watch a movie in my room."

We go back up to my room and I put in a movie that had Robin Williams in it.  I didn't want to risk a romantic comedy adding to the already-built tension.  If our feelings for each other were real, then I didn't want them clouded by the mood of the movie.  We watched the movie, his arms around me, sometimes tickling me.  After the movie was over, he said, "What are you thinking?"  And, ironically, without thinking about it I blurted out these words,


"I'm thinking you can't leave until you kiss me."
And there it was:  passive, shy Holly had become assertive and . . . demanding?!  The longest second passed between us before Trey smiled, pulled me to him, and kissed me.  I knew what this meant to me, but wasn't going to tell it to myself.
I didn't know what to think afterward except that this was totally impulsive, somewhat wreckless, and completely unlike me . . . and I liked it!  And I liked Trey, maybe even loved him (obviously, we know the ending to that one).  I was giddy, school-girl happy for the first time in a long while.
You might think that we started dating immediately after that, but we didn't.  Even though we obviously liked each other, and I knew what having Trey in my life meant, I wasn't ready.  He wasn't ready either, because he had made plans (before our kiss) that he was going to see his Utah somewhat-girlfriend over Spring Break.  And I didn't want him to feel chained committed to me.  I wanted him to choose me because HE wanted to.
Fast-forward (sorry, I know you're getting dizzy now) one month to Spring Break.  He and I agreed that we would take the week apart to think about everything, about us.  I went down to Sarasota, Florida to visit my brother's family, and he went to Utah.  I didn't know what to think when I got back to college.  I was scared of getting my heart broken, again.  But then, when Trey arrived back at our dormitory around 10:00 PM, he didn't go to his room first.  He showed up at mine.
And the rest, as they say, is history . . . 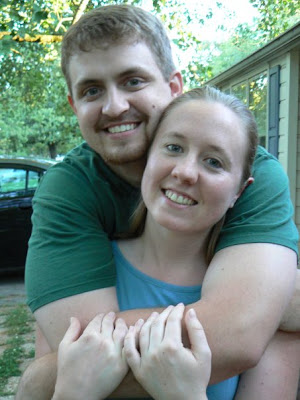 Tomorrow I'll post about our adventurous honeymoon (no, not in that way, mind-gutters people!)
Posted by Holly at 9:15 AM