One Month Review with Constance

So it's been 4 weeks since I got started with constant glucose monitoring with Dexcom.  Tuesday night, I downloaded all my readings using the Dexcom software.  I've already noticed it starting to have an effect on my numbers.  My average BG over the past month is 139 mg/dL which corresponds to an A1c of 6.5--the exact same I had back at my endocrinology appointment.  But I'm noticing this average has less peaks and valleys around that number, so I'm actually staying closer to my average as opposed to rising and dropping around it.

And now for the nerdy portion of this post:  the graphs!  As a climate data analyst by profession, looking at loads of data and trends is my bread and butter.  I love seeing how my trends have changed since having Constance.

First, here's a graph of the last week of readings.  You can even see here how my variations get smaller towards the right side of the graph.

Weekly BG readings from 21-27 July 2010.  (These pictures may appear small in the post, so click on them to get a bigger, nerdier view.)
The next graph I have found to be the most valuable.  It is my average BG readings per hour.  I used this graph and the numbers to alter my basals.  I'm trying not make a lot of changes at one time, so the only thing I changed for now is I upped my sleeping basal to bring down my average of 160-180 mg/dL (ewww!).  I also added a lower basal from 4:00-9:00 PM because I've noticed that I go low due to increased activity.

Hourly averages for the last 2 weeks.
And here is the table with that plot along with all the statistical information you'd ever want:

<3 Numbers!!!
So that's the gist of using a CGM in the numbers.  I've found it to be an incredibly invaluable tool, and I look forward to more improvements in my numbers over the next several months.  However, one hurdle I'm still getting used to is keeping the sensor actually on for a full week.  I've ended up using so much medical tape that I look like I got shot and there's this probe sticking out.  A diabetic coworker of Trey's gave him some Tegardem for me to try.  I put it on after I changed my sensor last night, and it seems to be working so far.  It's basically a clear adhesive that keeps the tape and sensor encased in this kitchen-clear-wrap-type material.   We'll see how it holds up during the week, but I definitely think this will come in handy for our beach trip in September to keep the salt water out of my tape. 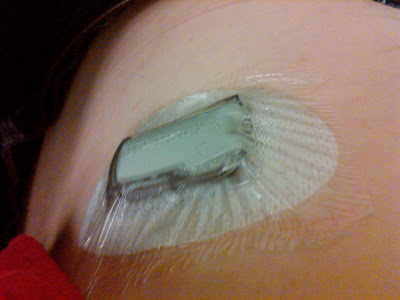 This thing ain't going nowhere!
Posted by Holly at 8:36 AM