Did anyone read the children's book Alexander and the Terrible, Horrible, No Good, Very Bad Day?  I somewhat believe this book was written for adults as a way to relate to kids when they have bad days.

Case in point:  this morning.  Actually, it started last night.  I looked at the Dexcom software for the first time since it's been almost a month since I've had Constance and I wanted to see how my averages were doing.  I was floored at how bad my nighttime numbers were, especially from midnight to 3:00 AM.  So I bumped up my nighttime basal 0.1 units.  But dinner for the evening was chicken parmesan with rotini pasta.  I thought I had my pasta bolus down (square bolus over 3 hours), but boy was I wrong.  My numbers were good for the first 2 hours, in fact my peak was only 129 mg/dL.  But as soon as the bolus stopped and I was ready for bed, I saw a southeast arrow heading towards my 70 mg/dL alarm.  Sure enough, around 10:30 PM, BZZZZZZZZZZZZZZ!!!  Test:  67 mg/dL.  Chomp 5 glucose tabs and head back to bed.  I was dead tired, but I was afraid to go to sleep.  My <55 mg/dL was going off, too, at 49 mg/dL.  I tried to stay awake long enough to know I was going up.  I wasn't "feeling" low.  I never experienced rapid heart beat, shaking, sweaty, or even dizzy which is usually my first symptom.  But my meter and Constance were telling me I was too low to feel comfortable going to sleep.  I finally saw 63 mg/dL with an arrow going up, so I felt confident enough to fall asleep.

The tabs bumped me up to the mid 80s where I stayed most of the night until 3:00 AM when my morning basal kicks in, so I was greeted with another low alarm at 68 mg/dL.  However, I know my numbers take a kick up when I wake up (stress?), so I went back to sleep until my alarm went off two hours later.  After my alarm went off, I hit the snooze but not long before Arnold started beeping with a "Low Reservoir" alarm.  "For crying out loud!" I thought.

When I finally got up to test, I was 90 mg/dL (thanks, dawn phenomenon).  I programmed my insulin for breakfast and hopped in the shower.  After eating and getting ready, I packed my lunch and hopped in the car (also noticed this is the 2nd time I've used the word "hopped", but I was really doing anything but, more like dragging).  My commute usually takes 25 minutes, and I made it all the way to my parking lot before I noticed . . . no wallet, no meter.  "[expletive] [expletive] [expletive]!!!"

I could do without the wallet until I got home, but not my meter.  Even with Constance, I still need finger sticks to calibrate, and I simply don't feel comfortable going 9 hours without a finger test.  So I pull back out of the parking lot and make the 25 minute commute back home, run into the house while leaving the car running, grab my wallet/meter, and run back to the car.  An hour and a half later, I finally walk up to my office and retrieve the necessary caffeine.

At the end of Alexander's bad day, he wants to move to Australia.  I want to move to Jacquie's island of bad pets, because at least someone there would have had a meter. 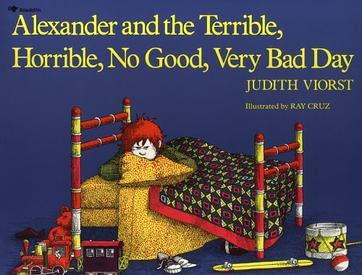